Melanie went vegan in 2014 and dove head first into animal activism, protesting fur, animal testing, circuses, animal rides, marine parks, and more. She had an immediate desire to meet farmed animals and visited Chicken Run Rescue a few times. It was love at first sight, in particular with a huge rooster named Butler. She knew she would rescue birds one day.

As a full time Addiction Counselor, Melanie is always advocating for the “underdogs” who struggle with negative stigma and stereotypes. This has now played a role in rescuing roosters, the “underdogs” of the animal world. She is a recovering alcoholic since 2006 and has found roosters to be a powerful, healing, and spiritual presence in her life. 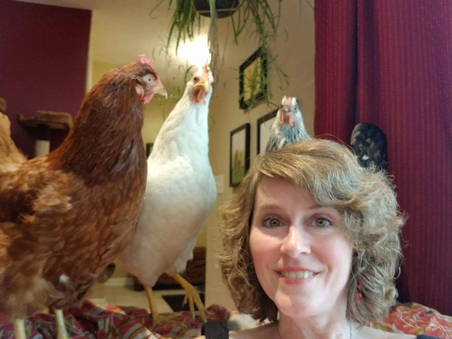 It wasn't long before she ended up with fostering chickens, which led, of course, to having a few permanent companion chickens in her home (currently Melody, Hellen, Subaru, Sweetpea, and Raven) and starting Chicken Butt Microsantuary.

When Rooster Redemption was established, Amy was one of the biggest fans. So when she was invited to be on the board, she jumped at the chance. Roosters hold a special place in her heart. 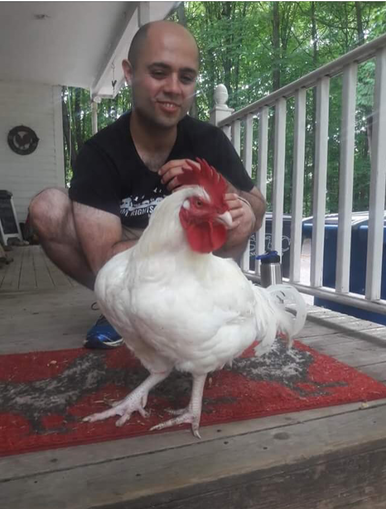 Dan Kigelman went vegan in 2013 for ethics, environment, and health. He is a regular volunteer with Animal Rights Coalition, helping with the Cuddle Coats program, and tabling / outreach.

​In his spare time, he enjoys salsa/bachata, reading, and pondering spending time in nature. Dan lives with two cats who keep him in check. 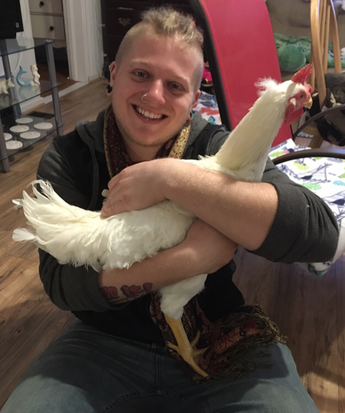 Sammy Barba began his vegan journey in 2013. Always having a love for animals, PETA2 documentary showed him exactly how his current habits were not aligning with his core values. Seeing many of his favorite bands speak of liberation for animals really clicked for him.

Sammy is a musician, performs in a couple of bands, partners in a production company, volunteers for Animal Rights Coalition, likes to educate on nutrition and environmentalism, is working on starting his own vegan cooking show, "#ShredIt! w/ Sammy Strings," and protests to abolish animal exploitation.

When he's not to busy saving the world, he likes to watch Lord of The Rings, play Legend of Zelda, and snuggle in bed with Juno The Dog, and Gronk The Kitty. 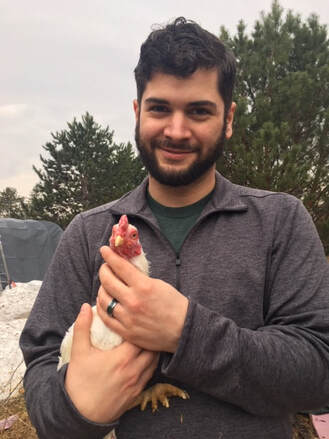 ​Brent Tilseth is a stay at home father, a student working toward an Elementary Education degree and license, a hip-hop artist, and a life-long soccer player. He has been vegan for 5 years, and the lifestyle has been the backbone of his growing family's values.

​Brent is the kind of person that cares about the well-being of everyone around him, and he is happy to bring his heart and mind to helping the roosters!

​Lex has been advocating for animals starting at their plate since they were roughly 3 years old as they have always considered themselves an empath for animals from a young age. Within more recent years they became full blown more dedicated to activism and doing what they can to help with animals in need.

​Lex is an aspiring Vet, but is currently studying to be a Veterinary Technician while working at a clinic as a Veterinary Assistant. In Lex’s free time they like to spend time with their 4 dogs and their rabbit, whether it’s snuggling or running around. 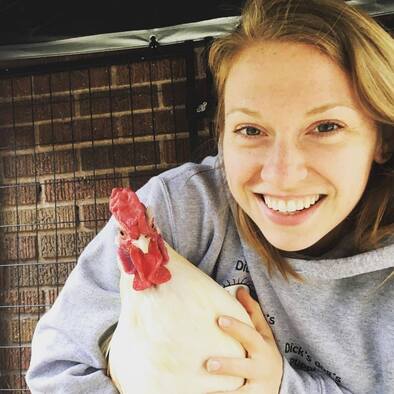 Katie has been involved in animal welfare and rescue her entire life. She eventually realized that saving some animals and eating others did not make sense so she went vegetarian. The more she learned about animal welfare, the more she discovered that she was still participating in causing harm to animals and felt hypocritical. Through obtaining a BA in Environmental Studies with a focus in social justice, the connections between animal agriculture and most other world issues was blatant and therefore, along with continuing to rescue animals, the choice to become vegan seemed like the obvious answer. Veganism is the Swiss Army Knife for world issues. Even though that non-elective economics class was awful, it did teach her about supply and demand!

The animals don't have a choice so she made a more compassionate one for them to stop contributing to their harm and suffering. Through her gradual transition to veganism and the education surrounding it, Katie realized that her values now aligned more with that of animal rights and not just that of animal welfare. Animal welfare sets out to make the cages bigger; Animal rights says to eliminate the cages altogether. Being that exploiting animals is completely unnecessary, not putting animals in the 'caged' situations in the first place IS necessary. Daily habits are how people live out their purpose and put values into practice so Katie set out to align her actions with her values by leaving them off her plate AND being actively involved in their rescue.

​Her experience in helping factory farmed (and otherwise exploited) birds as well as her interactions with other people who also help them solidified her love affair with the organization, Rooster Redemption.

Glenn went vegan in 2013 after becoming aware of the inherent injustice and cruelty involved in all forms of animal exploitation. He now volunteers his time constantly, focusing on animal liberation outreach and peaceful direct actions with organizations such as Animal Rights Coalition, Fur Free Minneapolis, and Minneapolis Animal Save. He is grateful and delighted to be able to help our misunderstood feathered friends at Rooster Redemption.
​
If he's not out advocating for our nonhuman animal pals, Glenn is probably wearing slippers and watching Futurama on repeat. He currently shares his home (and his vegan cheese) with two needy senior cats.

Ella has been vegan since 2015, and made the switch for environmental reasons, though she has stayed vegan for ethical reasons. A soon-to-be mother of 2 amazing kids, she works full time for a non-profit facilitating bone marrow transplants, and also owns and operates Vegan Mama’s Bakery. Her main passions in life are being with family (blood or adopted), helping those in need, and spreading love wherever she goes (usually in the form of food).